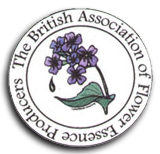 Where We Make Our Essences

Wild Medicine Flower Essences are made in places where there is strong Earth Energy. There may be ley lines or energy lines which run through the area or stone circles. Often the land is steeped with Spiritual significance. 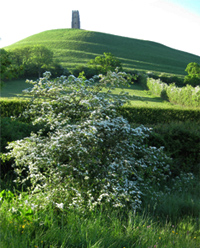 Avalon is the mystical name of the sacred Isle now known as Glastonbury. It is a place rich in Celtic, Christian and Arthurian legend. Rising majestically from the Somerset levels, Glastonbury is a place of pilgrimage for thousands every year and is considered by many to be the heart chakra of the Earth.

The landscape of Avalon holds a particularly strong vibration. Many unseen ley lines converge here, and it has been a focus of spiritual intent for millennia.

The Glastonbury Zodiac is an ancient landscape temple which is aligned with the stars. Significantly, many of the Essences are made on the sign of Aquarius. This encompasses The Tor, Chalice Hill, Bushy Coombe and Chalice Well and the old paths and orchards around them which are all beautiful and powerful sacred places.

The Abbey nestles in between Aquarius and the Piscean sign of the fishes on Wearyall Hill, site of the Holy Thorn.

In April 2003 on the Libra Full Moon we began the Essence of Avalon range. 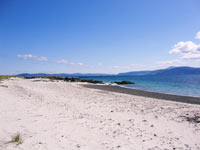 Iona is a deeply holy island situated off the north west coast of Scotland. The island is made up largely of quartz, with pure white sand beaches and brilliant turquoise seas. Iona is carpeted with beautiful wild flowers, and has strong elemental energy. Iona has an ancient history of both earth magic and early Christianity. In this way there has long been an energetic link between Iona and Avalon.

In May 2006 at the Wesak Full Moon we began the Essence of Iona range. 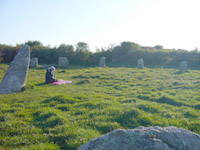 Boscawenun is an ancient stone circle, situated in Penwith, Cornwall. It is on the Michael and Mary leyline (as is Glastonbury). Hidden from the road it maintains a potent, timeless energy field. To visit here is like taking a step back in time. The pranic force is clear and strong, undisturbed by modern life.

In May 2007 at the Wesak Full Moon we began the Essences of Boscawenun.

Wistmans Wood is a fragment  ancient woodland with a wonderful energetic quality of Sancity. Oaks, Rowans and Ferns jostle together with amazing moss and lichen covered round boulders. It is a place Sacred to Plant, Rocks and the Earth.  We began our Dartmoor Essences here.

We continued at  Embercombe, a Centre for Sustainable Living. Nestling in a valley with a wonderful garden, a place of inspiration, positive action and hope for the future.